A single-layer or single-sided PCB is made from a single layer of base material or substrate covered with a thin layer of copper. In addition to the copper part, a protective mask called “Solder” is usually applied, normally followed by a last silkscreen mask called “Symbology” which is used to indicate all the components of the circuit.
Single-sided PCBs are simple to manufacture with a relatively low cost for this, where possible, they are often used in the creation of circuits for domestic appliances and large-scale commercial equipment.
Surface finishes are available for single-sided boards including Organic Solderability Preservatives (OSP), Immersion Silver, Tin and Gold plating or HASL with lead or lead-free. 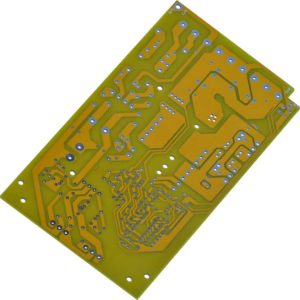 Do you need your pcb urgently?

QUANTITY
UP TO
0.5mq
SHIPPING
FROM
24H ON

Do you need a simple circuit?

If time it's not a big deal, choosing the BEST service you will have an higher discount

QUANTITY
UP TO
0.5mq
SHIPPING
12
DAYS

Do you need more complexity but flexible delivery?
PROD is the best choice in order to have the widest range of constructive characteristics

We put at your disposal our know-how for the most complex printed circuit designs with parameters or characteristics so special that they require the personal assistance of our team.
We will provvide customized solutions that meet your needs simply by sending us your files by e-mail.